Culture in a Business That Works

Successful businesses work. There are many definitions of success in business. One component common to all business success definitions is the generation of positive cash flow in the short-, mid- and long-term. Many variables factor into a business’s ability to generate positive cash flow; from an operations perspective, none are more critical than culture, strategy and execution. In this post we will focus on culture.

Culture
Culture is a force which determines how people are expected to conduct themselves. Culture helps to focus peoples’ thinking and moral compass while providing a filter through which to view the outside world.
Electricity and culture have a few things in common:

Deliberate Development requires leaders to determine what they want their culture to be. Typically this starts with values or beliefs that the leaders hold to be true. For instance, Chick-fil-A is a business with strong family values based on Christian beliefs. One manifestation of these beliefs is the decision to keep restaurants closed on Sundays, which is a component that has become part of the culture of Chick-fil-A.

Determining what leaders want their culture to be sounds easy enough, but many organizations struggle here. Following are 5 basic steps to developing a deliberate culture: 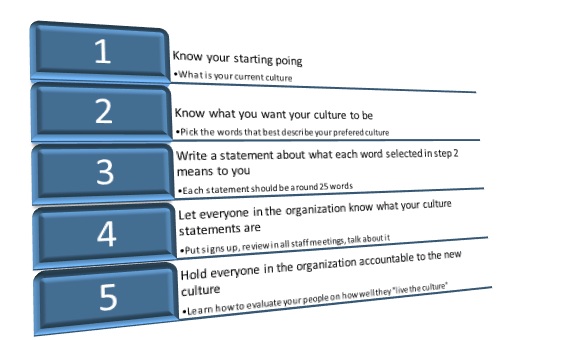 Following is an example from a client company the author recently worked with.

This company knew that they only achieved about half of what they set out to achieve. They also knew that people in the organization tended to pass the buck and come up with lots of reasons why they were not hitting their objectives. They had a culture of tolerance for mediocrity and no personal responsibility. The author asked them what type of culture they needed to win in the marketplace and be a world class company. They came up with 8 words/terms:

We then worked through what these eight points and came up with the following:

We are in the process of implementing these points of culture in the company at this writing.

In 2000, I was the lead negotiator of a multi-hundred-million dollar transaction with the then 7th largest company in the USA: Enron Corporation. On my first trip to Enron’s Houston World Headquarters, I noticed in their building’s opulent atrium a huge brass plaque with Enron’s points of culture carved within. Such words as honesty, integrity and respect for the individual were the words and terms I read. Riding up to the board room on the top floor, the culture statement was broadcast over monitors in the elevator. Enron had a stated culture. They did everything right, on the surface, to communicate that culture to their employees. Enron had a deliberate culture. Their management did not lead by example nor was the deliberate culture either encouraged or enforced. Enron had a true culture of greed, winning at any cost and always having to be on top. Funny, I remember that first trip to their headquarters and how the hair on the back of my neck stood up when I walked in the door. My instincts told me something wasn’t right. I shrugged it off as opening day jitters and went about negotiating a deal. Culture is important; my instincts told me these guys were bad regardless of what the big brass plaque said. I should have listened to my instincts, and so should you when you are faced with a similar situation. Remember when developing your own organization’s culture, this lesson from your childhood, “I can’t hear your words because your actions are speaking so loud”. You must lead by example.

In the case of Enron, senior management paid lip service to their intended culture. Management did not recognize or reward individuals based on adherence to their culture statements; thus, the intended culture was neither encouraged nor enforced. The example set by Enron’s leaders was not consistent with the big brass plaque. In one infamous example, then CEO Jeff Skilling responded to a legitimate question from an industry analyst during a quarterly earnings release call by calling the questioner an A_ _ H_ _ _. “Respect for the individual,” I think not. More than any other factor, the culture at Enron caused its horrific crash and demise.

During my undergraduate years, I spent a summer in the United States Marine Corps (USMC) Officer Candidates School. Do the Marines have a culture? Yes they do, probably as strong a culture as in any organization in the world. Does the culture of the USMC help them to achieve their mission? Yes it does. It is absolutely crucial to attracting the right people into the Corp and motivating those in the Corp to get the job done.

How has the Marine Corp developed and sustained their culture? The Marines have their traditions, (e.g., November 10 might not mean much to most people, but to a Marine, it is one of the biggest days of the year: the Birthday of the Marine Corp. Celebrations are grand and elaborate the world over in honor of this day. They even have a tradition of cutting the cake with the first piece going to the oldest Marine and the second piece going to the youngest Marine). They have their history; we spent as much time in Officer Candidates School learning about the history of the Marine Corp as we did learning about combat tactics. Marines know what they value: honor, courage and commitment; if you are a Marine who lacks in any of these three areas, you will either change yourself or you will not be a Marine for long. They have a slogan, Semper Fi (always faithful), they have a song, (The Marine’s Hymn) and they have an emblem (the eagle, globe and anchor). Each of the highlighted words above represents how the Marine Corp both develops and sustains their culture.

The Marines have an intentional culture, which is instilled in every Marine, from the first day they take the pledge to serve. The leaders (officers) absolutely lead by example. Even though in Officer Candidates School we would often finish our day after midnight and be up for PT (physical training) at 0430, (4:30 am), our company’s Captain was always there at the end of the day and fully dressed and ready before anyone else to start the day. Is the culture of the Marine Corp encouraged and enforced? Without question; in Officer Candidates School a typical company will end the program with 50% of the candidates it started with, (the author did graduate but went the business route after he graduated from college and declined his commission), any candidate who is “not with the program” is immediately removed from the school and not allowed to come back into the Marine Corp, ever. Enron failed, and failed shamefully, because of its culture. The United States Marine Corp is a proud, strong and extremely successfully organization because of its culture. Does culture matter? You answer this time.

There are many, many examples of times when a good culture has gone bad or become ineffective in the current marketplace and requires change. AT&T, (here AT&T is referring to the pre-SBC Communications acquisition company, in 2005 SBC acquired AT&T and kept the AT&T name), is an example of an organization that had an effective culture in their old business model (a regulated monopoly) but needed a new culture to compete in the changing and competitive world they found themselves in in the 1970’s and beyond. AT&T had a culture that worked and a business that worked for most of the company’s life, but its culture was its demise in the end. AT&T was not quick enough to react to massive changes happening in its markets in the 1970’s and 1980’s. The signs were all there; smart people were running the company but the culture of “take care of your people even when your people are not taking care of the company” and “make decisions slow and steady,” ran the company to failure. Could AT&T have been saved? In my opinion, yes. How could it have been saved? Only one way – a change in culture. AT&T was not successful at changing its culture, and died a slow and painful death.

Another example of a time when a culture had to be changed but was not until much damage was done is the very unfortunate situation which took place at Penn State in their football program. Their coach, Joe Paterno, lead the Nittnay Lions from 1966 until his program was disgraced in 2011, forcing his resignation. Heinous and deplorable acts were committed by a member of Coach Paterno’s team. The Coach and others in a position to stop the acts were made aware of the situation and chose to do nothing. They had a culture of untouchability, of “we are champions,” of “we are the pride of the University,” and a culture of “we watch out for our own.” This was a very dangerous culture and lead to the ruin of the program as well as the lives of many people. After the toxic culture of the Nittnay Lions caused its ruin, the University stepped in to take corrective measures. Good leaders see the toxicity of a bad culture and react before their world comes crashing around them; Penn State did not have good leadership. They have since worked towards changing the culture of the football program and hopefully many other leaders around the country and the world have taken note and are doing what they need to do to change their cultures to avoid a similar fate.

Part of your job as a leader and a manager is to demand the culture that will allow your organization to achieve or exceed it goals and win in the market place while following the rules set for being a good corporate citizen, human being, and custodian of the planet.

How does one go about changing an organization’s culture when it needs to be changed? Clearly changing culture is not for the faint of heart or those lacking in resolve. The first steps are discussed earlier in the chapter and displayed in Figure 2.3. After these steps have been completed, there are really only two components to changing a culture, but they are significant, as follows:

There is an old Turkish expression, “The fish stinks from the head”. As the leader goes, so goes the organization; with strong leadership, change can happen, without it, changing a culture to any type of deliberate or intentional culture will not happen.

About the Author:
Bill Eveleth is a Group50 Consultant, business coach and teaches college at the graduate and undergraduate level. He is the author of two books, The 7 Rules of Goals, Getting What you Want and 40 Day [to bring out the power within]. He is also one of Group50’s leaders in our performance management practice.