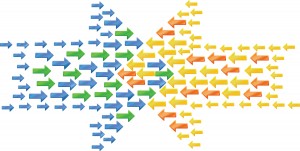 The pendulum has swung too far on Consensus Leadership. In a New York Daily News article published on January 3, 2001, called “Not Exactly His Father’s Cabinet, But It Could Be,” Michael Kramer wrote that Abraham Lincoln‘s observation is worth recalling: “No matter what the cabinet thinks, only one vote counts.” Abraham Lincoln was unquestionably a great leader. That can’t be said about all leaders. More and more, we are seeing consensus leadership styles get in the way of organizations getting things done: leadership paralyzed with indecision until all members of the team are on board. Lincoln would not have supported consensus leadership. He knew it was his responsibility to make a decision. Some leaders rely on consensus leadership techniques to:

Consensus leadership can be powerful and engage people who are part of decision making in voicing there opinion, but, leaders must lead. It is not possible to have full consensus in today’s complex world. If a leader gets it wrong, they are responsible. What is worse? Getting it wrong and quickly fixing it, or allowing consensus leadership to get in the way of making any decision, or a sub-optimal one. As U.S. President Harry S. Truman said, “The buck stops here.” This is how a leader thrives.

The focus of Group50’s Organizational Development 5.0® Practice is to help you simplify the decision making process and get the proper leadership alignment across your organization generating greater results by making leadership as much process as talent. Give Bruce Dougan a call at (909) 949-9083, email us at info@group50.com or request more information here.

This entry was posted in Organizational Development, on June 30, 2014
Share: