Where Did My Lettuce Come From? – This Question Needs an Answer! 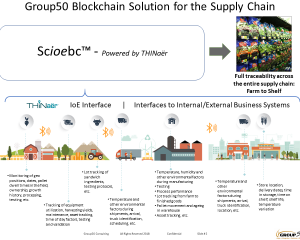 The Washington Post published an article about the outbreak of E. coli in lettuce on April 20th that stated: “Although the exact source hasn’t been identified, federal health officials have said information indicates that the contaminated lettuce was grown in the Yuma, Arizona area. But consumers anywhere in the United States who have store-bought romaine at home, including in salads and salad mixes, should throw it away immediately if they don’t know its specific source, officials said”.

In a later article on the 27th of April, the Post reported, “Investigators have not determined where in the supply chain the contamination occurred — whether in the growing, harvesting, packaging or distribution stage”.

The LA Times and many other media outlets have reported on this as well. Despite 98 people in 22 states being sickened, some with liver failure, I don’t see a cry from consumers, the media or the government demanding a solution to this problem when the technology exists to immediately identify “Where my lettuce came from”.  Why is that?

The application of blockchain technology (the underlying technology for crypto currency) has already proven that it can provide the answer to where my lettuce, pork, beef, fish or any other food originated. Utilization of the blockchain allows information about farm origin, factory data, temperature, shipping information, testing and certification, expiration dates and a host of other information to be tied to every head of lettuce from farm to table. In China, shoppers will soon be able to see the entire chain of custody for a head of lettuce or pork by scanning a barcode (QRC) label on the packaging in the store.  What happened to “America First”?

The University of Rhode Island recently reported: “Each year in the United States alone, it is estimated that more than 33 million people become ill as a direct result of food borne illness. More than 9,000 people die. The cost in lost wages, insurance claims and medical bills amounts to between $7.7 and $23 billion a year.”

While food contamination from E. coli and other food borne diseases is approximately 1/4th the cost of gun violence to this country, it kills almost as many people (9,000 vs. 13,000) every year.  Unlike gun violence, there is a solution to this issue that everyone can easily agree on.  Food safety should be a very high priority for everyone.  The consumer protection agency, federal and local governments, the Center for Disease Control and consumers should be screaming about this and demanding that everyone in the food industry implement this type of technology. Perhaps we need to get a “Food Safety Matters” movement going, because at the end of the day lives do matter.

About the Author:  Jim Gitney is the CEO of Group50 Consulting. Founded in 2004, Group50’s Consultants are subject matter experts in global supply chains.  Group50 has recently launched Scioebc, a blockchain product, Powered by thinaer that can be implemented in any business to document the full chain of custody and provenance of a product from farm to table.  You can find out more about our effort to improved food safety by calling (909) 949-9083, requesting more information here, or by sending a note to Info@group50.com.

This entry was posted in Blockchain IoT, Manufacturing and Distribution, Supply Chain Optimization, on April 28, 2018
Share: